Simplified CBT can be seen as an integration of two forms of therapy - cognitive therapy and behavioral therapy. Behavioral therapy has been around for a long time but received its breakthrough in the 1950's. It is based on learning therapy, the theory of how people learn from and are influenced by one's surroundings and one's own actions.

In this context learning means both conscious and unconscious learning about everything that happens. This may be anything from driving a car and socializing with other people, to how one reacts emotionally and physically and how one manages, for example, disappointment or worries.

In traditional behavioral therapy (together with a therapist) you will often start with a so-called behavioral analysis of the situations you experience as problematic. There you look at how earlier learning can have contributed to the problems and how you can learn new strategies that work better.

In traditional cognitive therapy you then work together with the therapist on changing these thought patterns in order to feel better.

Exposure is a very useful behavioral therapeutic method used to work with many different problems, primarily in different types of anxiety issues. It means that you learn in steps to approach situations that you had previously avoided. If exposure is made in mutual agreement with a skilled therapist it will lead to an effective re-learning process. What previously caused worry and fear becomes emotionally neutral and no longer prevents one from doing what one wants to.

Applied relaxation is a simple relaxation method, which primary strength is that it can be used in many different everyday situations. Applied relaxation can among other things be used to counter stress, pain caused by tension, worry and to increase endurance.

Behavioral activation is mainly used when one is depressed or feeble. It is a way to break a vicious circle of passivity and hopelessness. In practice this means that the activity level is increased slowly and gradually. One effect of this is that one eventually experiences the things that one does as more positive and meaningful.

An example of an exercise that you can do in cognitive therapy is to try and remember which thoughts that you had the last time you felt down, and to write these down in a special form. Then, in different ways, try to question the reasonableness of these negative thoughts and see if you can find new, alternative thoughts.

Once you learn to detect the thoughts, you can more clearly formulate to yourself how you're thinking about yourself and your own actions. Then, together with your therapist, you will continue to work towards managing these thoughts in a constructive manner.

As a patient in Internet treatment you will go through these types of exercises in a more independent manner after been guided by the self-help treatment. In order to progress in the treatment, or when problems arise, you can get in touch with your therapist via e-mail. 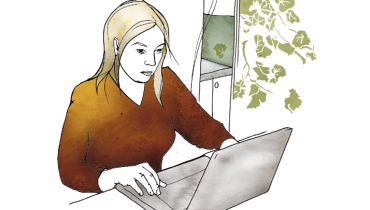 This is how it works

Here you can see an overview of the different steps that an Internet treatment program consists of.